A Miner's Safety Equipment- his safety helmet and lamp 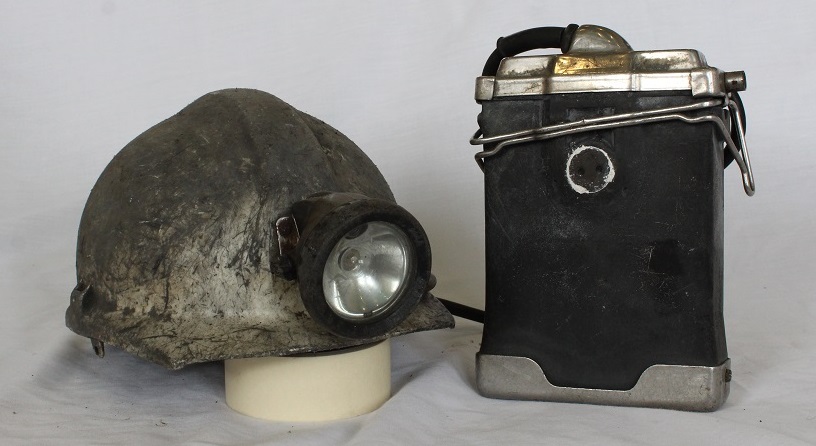 The Miner's lamp was an essential piece of his equipment. This short video uses images of artefacts and photographs from Slieveardagh Mines to share more of the story of the day to day use of the lamp and battery .

The Slieveardagh miners worked in dangerous and tragically health damaging conditions. Health and safety was a thing of the future. The miner provided his own clothes, there was no specialised work-wear excepting the helmet and lamp.

The helmet was necessary to carry the lamp as the men were working in total darkness. Early helmets were leather and the later ones were very like the safety helmets required on all building sites today.

The early lamps were carbide lamps that had to be maintained by the miner, he had to fill the lamp’s chambers with powdered carbide and water, and the resulting mixing of the carbide and water produced a flammable gas which the miner lit. The carbide lamp was worn on the helmet. The miners recalled lamps regularly going out underground and needing to be re-lit to allow the miner to continue working.

The electric battery was a big development in the miners equipment, now he had a battery that should stay lighting for the full eight hour shift, it was powered by a re-chargeable battery pack. The battery pack was worn on the belt and weighed about 2 kg. Each colliery had a 'lamp house' where the lamps and batteries were left at the end of each shift for maintenance, and for the battery to be recharged. Each miner had his own battery, some batteries were fresher than others and sometimes they did go out underground.

When the man took his lamp and battery for his shift he exchanged it for a small metal disc (tally) with his mine number on it which was hung in the lamp house until the battery was returned. Like the other equipment- picks, shovels, bits etc the miner had to pay for his battery and charge and there was a deduction for it in his weekly pay packet.

No items found.
Please allow a few minutes and refresh the page to see your comment.
Oops! Something went wrong while adding your comment. Please try again later.
62e96add13bc618c78dca99e