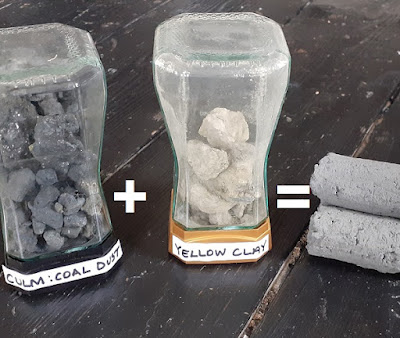 In Gurteen the miners extracted the coal and it came to the surface. Before it was sold it was cleaned of muck and stone and graded or sorted by size.

The coal came to the surface in the big skip and was emptied in one of two silos under the tracks in 'The Landing' (a big shed) and fed onto the first of three conveyor belts. It then moved onto the second belt to the 'Washery' where stones were removed by hand and the coal washed . On the third conveyor belt it traveled along the 'Gantry' to the 'Crusher' and on to the 'Grader'. The coal was graded by size.There were six bunkers for the graded produce- the first was for the few stones that had got past all the sorting and cleaning, then Culm or Duff, next the Grains, bigger Peas, bigger again- Beans and finally Nuts- the biggest coal.

The smallest produce culm or duff has a special history of use in household fires in the Slieveardagh area when made into Culm Balls.

In our blog about Mardyke Colliery 'duff' was mentioned in one of The Mining Company of Ireland's Reports from 1849. Seán O'Brien who grew up in Killenaule, read the blog and it reminded him that culm was marked on the dockets from Killenaule Creamery as duff. He wondered where the word duff for culm came from....

The Oxford dictionary states that duff is 'Coal in the form of small particles and dust: small coal, slack. Also duff coal.', it is not an Anglicised version of dubh (black) as it was also being used in Colliery reports in England.

Two references to Duff from the time of the working mines are:

Seán shared his memories from the 1940's and 50's of the Slieveardagh coal mining area.  He recalls purchasing Culm at Killenaule Creamery where it was marked on the docket as Duff, he also made 'a few trips for culm' directly to Ballynonty mine with a donkey and cart loaned from Hanlys of Killenaule', and as he says 'Better still, with the same cart I went to the Ballinastick/Acres (?) area for Culm also, produced from a verticle shaft called a 'Basset''

Locally Duff or Culm could be sourced from the collieries, collected from the streams and river banks where it was washed out from the mine workings and was also was a product of the much smaller Basset or Bell Pit Mines. There were basset mines across the Slieveardagh coalfield, they were usually family enterprises, much of what they mined was used in their own households or sold locally.

The duff or culm was mixed with Yellow Clay to make Culm Balls.Yellow Clay was found across the area, if a farmer had yellow clay on his land he would often allow other families to bring a cart of good clay to his land and exchange it for the useful yellow clay.

Most of the recorded history of mining and fuel production in the area is of the men who worked in the mines.

Culm ball were usually made during the Summer by hand or using a culm ball shooter. Families made the balls for their own use treading the mix, making the balls and drying them to store for the winter. If a horse was available a large quantity of culm and clay could be prepared by walking the horse on the mix.

After our early blogs Geraldine Healy commented 'as with every Heritage Project women have been airbrushed out' and I know they didn't go down the mines hacking away at seams but in Cornwall they had an important  role in grading and sorting the product.' So unlike Cornwall there were no women working with coal at the mines in Slieveardagh, but many woman worked hard converting the otherwise nearly useless culm into Culm Balls.

From Culm and Clay to Fuel: 'Dancing the Culm'

Finally today we have an excellent film made in 2017, Roisin O'Grady, Tipperary Heritage Officer is pleased to share this Story from the Slieveardagh Landscape .

Michael 'King' Cleere  visits Slieveardagh National School, now known as 'The Old School' where he was a pupil, Lickfinn Mine where he worked, and finishes up in Glengoole at  Buddy Brennan's Dancing the Culm.

Stories from the Landscape - Michael Cleere from Heritage Office Tipperary CoCo on Vimeo.

This film is one from the series 'Stories from the Landscape' and was funded as an action of Tipperary Heritage plan by Tipperary County Council and the Heritage Council.

If anyone has any names of the women who worked making the Culm Balls for the Convent or others, or information or memories about their own basset mines or experiences of making Culm Balls please share them with us to add to our important mining history of the Slieveardagh Hills.

No items found.
Please allow a few minutes and refresh the page to see your comment.
Oops! Something went wrong while adding your comment. Please try again later.
6257dc98c4bf80eb5c3fd4a6