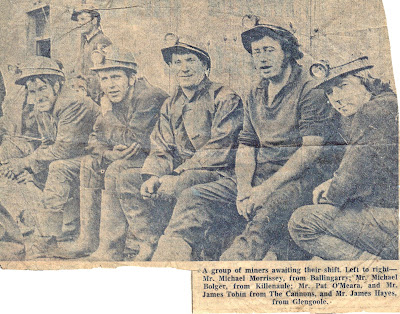 Gurteen Mine, Ballingarry Colliery provided work for men from the whole Slieveardagh area

Tommy O'Brien purchased the mining rights to the Slieveardagh Coalfield in 1952, he worked the mine at Clashduff until 1957 when he moved the operations to Gurteen, working there till 1973.

In the 1960's there were 360 men working underground at Gurteen.

There was a day shift and an evening shift. Compressed air was piped underground to operate the equipment the miners used, it also provided some ventilation for the miners and there were air shafts with fans to help draw away the bad air. The only safety equipment the miners had were their helmets and battery operated lamps, otherwise they provided their own boots and clothing. The lamps were a big improvement on the old carbide lamps as the batteries would last a shift and did not go out unexpectedly.

There were many more men working above ground or 'Topside'.These men and a very few women (working in the offices and at the weighbridge) supported the miners underground

Gurteen was a big operation when it was working .

The mining stopped at Gurteen in 1972, but the yard was used for storage and grading up until the end of mining in the coalfield in 1989.

The miners had to walk down the crank or mine entrance at the start of their shift.
Underground, in the mine they might have to walk more than a mile before they reached where they were working. The underground roads from Gurteen crank ran underground as far as the colliery at Earlshill. So the miners would take food down with them and have their breaks underground and not return to the surface until the end of the shift. There were small tubs or bogies that they would come back up in at the end of the shift.

Michael 'King' Cleere tell us about the history of and developments in Gurteen Mine.

Tragedy in Gurteen Mine

In 1964 mine manager Mr Gannon was trapped and drowned when the mine was breached by water from old mine workings.

Electrician Christy Lawlor was manning the pumps at Foilacamin, an old 19th century mine with a vertical shaft. The water was continually pumped up and out of the workings, and when the breach happened the water stopped coming up from the pump and he rang over to the mines alerting them to the incident.

Michael Hanrahan  was one of the trapped miners that night.

They had been underground since 4.30 and at about 8.30 the miners congregated together and stopped for their tea and sandwiches, Mr Gannon was the manager on the evening shift and along with Tony Joy and Ned Hayes had a break with the others before going to see where the water was seeping through.

Michael and his brother Danny went back to where they were working, Michael was up the 'topple', (the miners worked up into the seam so the coal could be dropped by gravity to the underground roads below) when there was a sudden bang and 'smoke' or dust. The whole road below them was flooded.

Jim Maher, Jimmy Lawlor and fireman Michael Heaphy (a fireman was a miner who set the explosive charges to blast into new area of the mine) were also working above that road and managed to join the Hanrahans up where they were working.

The road below had fallen in, and the water was backed up. Michael says they were in dread that the water would hit the roof and cut off the air but they did still have the air from the compressors they had on their machines. They thought they were doomed and said their prayers, and waited.

After some hours they heard noise. Miners not involved in the incident had managed to let off some of the water and the trapped group were able to escape by holding onto the pipes and climbing over the debris from the fallen road to safety.

When the water had breached the workings Mr Gannon, Tony Joy and Ned Hayes were washed along in the water, tragically Mr Gannon did not survive and was drowned. Ned Hayes was never included in the newspaper reports, but that evening he saved Tony Joy's life. Tony had been washed to a timber behind the road and Ned pulled him out.

Michael says although the incident was devastating in the area they were working, there would never have been enough water to flood the whole of Gurteen as there was so much ground open.

He finished recalling the evening with 'If no one had to go up the road that night there would have been nobody lost'.

Michael and his brother Danny are the only two men involved in the flooding that night that are still alive.

Michael generously recalled this terrifying and traumatic incident for Patrick Lydon in an interview in 2020 for Suir Vision a project Patrick co-ordinated on stories about the water that feeds the Suir river.

Wally Mackey spoke to RTE that day and has collected and shared many excellent photographs and articles on Gurteen mine over the years. The television report can be viewed in the RTE online archive. (https://www.rte.ie/archives/2017/0921/906472-ballingarry-coal-mines-to-close/)

The last major incident at Gurteen reported on was the underground fire in 1973.

If you have any photographs or memories of Gurteen Mine please share them with us so they may be recorded as part of this important Tipperary Coalmining History.

No items found.
Please allow a few minutes and refresh the page to see your comment.
Oops! Something went wrong while adding your comment. Please try again later.
6257e0e152f14b61e2ba3a86