Memories of a Miners Daughter 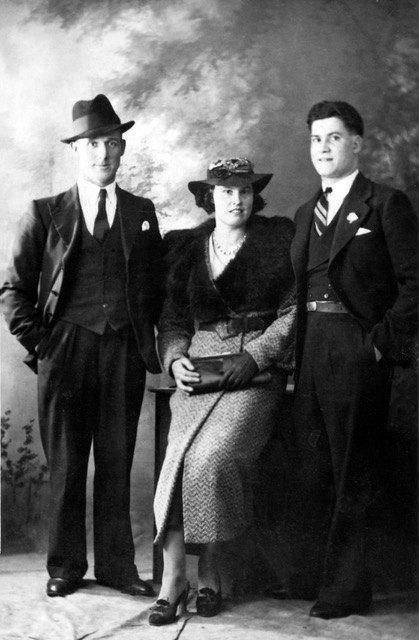 Maureen Bradshaw (nee Cleere) originally from Ballingarry shares a great studio portrait from the 1930s. She tells the story of her miner father Nicholas (Nick) Cleere including a short history of the Cleeres going back to 1790 and their arrival to the Commons. Maureen also has interesting first hand memories of the miners’ strike in 1957. We are very pleased to get this precise piece of genealogy and mining heritage and will add more mining family’s histories over time.

Maureen: My father Nicholas (Nick) Cleere was born in The Commons in 1915 to John Cleere and Bridget Morrissey.

My father Nick and William “King" Cleere were 2nd cousins, they had the same great-grandfather Timothy b 1823 who lived in Boggan near Tullaroan. We have traced the family line back to Timothy’s father who was a James Cleere born about 1790 married to a Mary Grace. They also lived in Boggan. There were no Cleeres in The Commons until Timothy went there.

From left to right in the photo are James Lyons, Mary Lyons (nee Cleere) b1906 and Nick Cleere b1915. Mary and James were married in Ballingarry in 1932, I think James Lyons also came from The Commons, and the couple went to live in England.

My father Nick lived with his sister Mary and James in Hanwell West London until 1939. He then returned to The Commons as his father John was terminally ill and met my mother Kitty O’Meara so he never returned to England despite being engaged to a girl there!!  Nick and Kitty (nee O’Meara) were married in August 1942 in Ballingarry. We lived in a little cottage (1st house on the left on the Glengall road) in Ballingarry.

Nick was a miner from the mid-forties until 1954 when he had an accident in the mine which resulted in him losing an eye. He sued for compensation and was awarded £800 but never worked in the mines again because of ill health. He died in Sept 1956 at the age of 41 from kidney disease.

The miners’ strike in Copper was in 1957. Extra police were stationed in Ballingarry at the time and my mother was asked if she would provide dinners for these policemen. I can’t remember how much she was paid but it certainly helped her to take care of her 6 children. I was 12 at the time and can remember the names of two of the policemen who came to our house. I remember a Garda Kelly. I think he was the permanent policeman, there was also Billy Martin among others.

I moved to England in 1960 and lived in London until 1970, I now live in Somerset in the south west with my husband Dave.

Thank you Maureen for this piece which includes so much of the plight of miners and mining families: emigration, accidents in the mines, early death, widowhood, and observations and memories of a miners child.The photograph of Nick, his sister Mary and James is a captivating studio portrait and a vivid snap in time.

I lived in Moyglass and our neighbors Bill Gleeson and Denny Healy worked in the mines during the 50’s . The name King Cleere was regularity mentioned and as a young lad when I would see king in Killenaule i would look at him in amazement

Wow, so good to read all your comments. What a great site, keeping alive the memory of all those who have passed but not forgotten.

Uncle Nick was my dad's brother. My dad was Paddy Cleere. Reading this brings back so many fond memories from visiting my dad's family when I was a small child and listening to stories of him working in the mines. Thank you Maureen.

Nick's wife and Maureen's mother was Kitty O'Meara. Nick and Kitty were married in Ballingarry in August 1942.

Lovely story and a fab photo. There is a video of the miners working live footage black and white which iv seen. Thanks for sharing.

Thanks Maureen for the history my father George Lyons was born 1908 in the Commons.

Excellent piece with so much information that I'm sure many of the Cleere connections in The Commons and Ballingarry will be interested in. Thank you Maureen and Tipperarycoalmines.ie for sharing this..

Please allow a few minutes and refresh the page to see your comment.
Oops! Something went wrong while adding your comment. Please try again later.
629dcb7adf19188fb95f3067