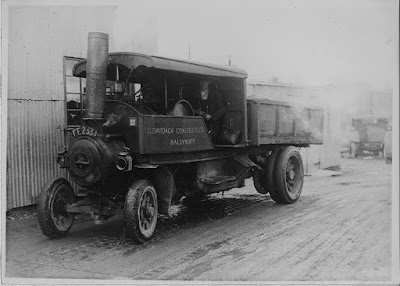 Mianraí Teoranta (Irish for, literally, “Mines, Limited”) was established as a semi-State company in 1941. The company acquired rights to mine coal in Slieveardagh in 1941, selling the rights on in 1952.

Mianraí Teoranta (Irish for, literally, “Mines, Limited”) was established as a semi-State company in 1941. The company acquired rights to mine coal in Slieveardagh in 1941, selling the rights on in 1952.

There is only the spoil heap (stone taken out of the ground to reach the coal and piled on the surface) and the ruins of the managers house still at the Ballynonty mine site.

During 1941 and 1942 the development of Ballynonty Mine was documented by Clonmel photographer M A Keeting. But for this we would have little recorded history of this era of mining in the area.

This semi-State company was formed five years before Bord na Móna which also provided employment in the Ballynonty area. Both Ballynonty and Lickfinn  or Young’s Mine were worked during the War Years, but by 1948 these had become uneconomic. The whole operation then moved to the Copper Basin in Ballingarry

M A Keating also recorded the opening of the mine in Copper Basin in 1948.

Today Michael 'King' Cleere visits the site of a mine opened in 1941 by semi-state company  Mianraí Teoranta and then moves on as they did to Clashduff.

Did any of your relations or neighbours work in Ballynonty in the 1940's?

We are collecting the names of families or men who worked in Ballynonty in the 1940's, as there is very little documented information on who worked there.

We posted a photograph of two miners whom we believe worked at Ballynonty.

Both Joe Hennessy and Paddy Robinson asked does anyone know the names of these two miners, we would like to be able to name these men too.

The photograph is an important historic record as right up till the 1960's many of our miners started working in the mines when they were 14, working alongside their fathers or older family members.

Any names for any of these men too please?

We can be messaged publicly in the comments box at the end of each blog post, or through Facebook. We also have an email address tippmines@gmail.com if you have any names photographs, memories or stories to share about the mines from this time.

This is part of our really important local and mining heritage, if you are related to or knew someone who worked for Mianraí Teoranta please can you send us on their name and dates so we can record them for the future. We would also like to add any photographs of these men and their families to our resource of the local mining history.

Thank you to Gerry Clear who visited the Slieveardagh Coalfield with the Mining Heritage Trust in 2013. He has sent us a  collection of the photographs he took that day.

No items found.
Please allow a few minutes and refresh the page to see your comment.
Oops! Something went wrong while adding your comment. Please try again later.
6257e1f649a30a55b8ca14e2