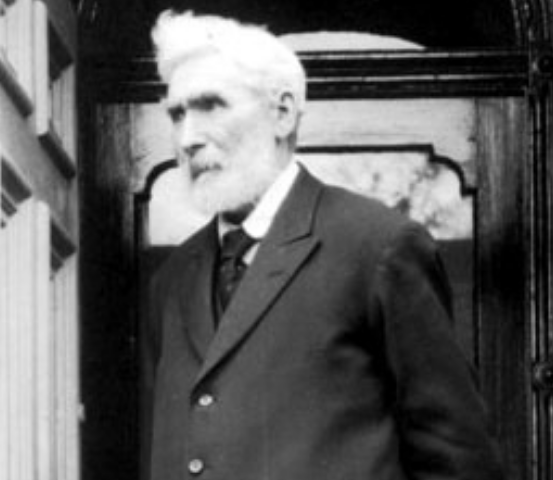 Welcome to the first of our newblogs published through www.tipperarycoalmines.ie We thank Sarah of www.whitesetterdesign.com for this new feature- now we can post new material directly to the website.

His is the story of a miner and also an inventorand we are proud that he came from the Slieveardagh Hills. We thank Alma Cooke who shares a common ancestry with Richard Sutcliffe for this putting together this article.

Richard Sutcliffe (1849 – 1930) was a native of the Slieveardagh hills and for a short time he was owner of a coal mine at The Commons, Thurles. Richard later went on to become a well renowned engineer and inventor of coal mining equipment. He invented the world’s first underground belt conveyor, which revolutionized coal extraction and eased the laborious and dangerous work of mining.

Richard was born to Joseph Sutcliffe and Rachel Deeves on the 26th January 1849 on a small farm in the townland of Knockatoreen,Grange. Richard Sutcliffe’s ancestors originally hailed from Yorkshire around 1633, his grandfather was the first to come and settle in the Slieveardagh area. Richard was educated in the nearby Erasmus Smith primary school on Grange Hill. As a youth he helped his father at his small coal yard in a town nearby. When he was 18 he accepted a post as a clerk in the Wolf Hill Colliery, Co Laois and within a short time he became a supervisor. He took charge of cash accounts and the surface works including sinking a new shaft atthe pit. Richard Davis a mining contractor came from the England to sink a new shaft. Davis brought his family including his 18-year-old daughter Grace Davis with him. Richard and Grace were immediately attracted to each other, after the works were completed the contractor and his family returned to the England.

Richard followed Grace across the water to England and they married in 1874. That year still in his twenties; Richard took night classes and sat and passed examinations in Manchester that qualified him to work as a Colliery Manager. Shortly afterwards he and Grace returned to Ireland, where he took the position of manager at the Wolf Hill Colliery.

In 1878 he became the manager at the Clogh Colliery at Castlecomer, by this time the couple had 5 small children in the small Manager’s house in Clogh with a maid.

In 1884 Richard purchased Kilcooley Colliery at The Commons and his young family resided in Lisnamarock where the girls attended the Convent school in Ballingarry. His decision to purchase this mine however was a financial disaster.  He could not get enough workers to work the pits, or sufficient sale for his coal. At this time the coal was mainly used to burn lime to fertilize the land, and farmers were turning to imported fertilizers.  Householders also preferred the imported sea-coal to the culm balls produced at The Commons because in the open fires of the time there was little blaze from them, and they emitted a strong sulphurous smell. Unable to sustain the losses, he went bankrupt and was forced to close the mine after only 18 months in operation. Now broke, he was forced to find paid employment in England,leaving two of his young sons in the care of his aging parents until such a time as he could afford to come back for them a few years later.

In Richard Sutcliffe, The Pioneer of Underground Belt Conveying by Edward D. Sutcliffe & R.J. Sutcliffe (published in 1939) an event which happened in one of the collieries in Ireland was recounted by Richard.  He was the manager of a colliery which only had one shaft. Under the legislation of the time only a certain number of men could work in the pit at any given time. A miner had been discharged and was dissatisfied, and he arrived at the pit accompanied by a Police sergeant. Approaching Mr Sutcliffe, the sergeant informed him that he wished to go down the mine in search of some tools which had ‘been stolen’.  Mr Sutcliffe suspected that the disgruntled employee had informed the authorities that the number of employees exceed the permitted number, and tried to dissuade the Police sergeant from entering the mine because of the dangers. The Police sergeant showed him the search warrant which left him with no choice but to obey. Mr Sutcliffe invited the sergeant to accompany him to the pit head, and upon arrival there Mr Sutcliffe signalled to the winding engine-man to pull the cage up to the pulleys.  When this was done Mr Sutcliffe said to the sergeant, “There’s the pit. You are quite at liberty to search the pit” The sergeant protested but Mr Sutcliffe pointed out that the warrant included no mention of the use of the winding engines. All further arguments were useless and that ended the matter of the missing tools or searching the mine.

Richard prospered again over the next years and he settled his entire family of 8 children in Barnsley. Richard had the coal cutting machines from the Wolf Hill colliery purchased, dismantled and shipped over to the Clayton West Colliery near Huddersfield, and he operated these machines as a mining contractor.  These cutting machines produced 30% more coal than could be obtained by hand and so the pits output was increased greatly and these machines continued in use there, for many years after he left the colliery, demonstrating the quality of the machines.

During these years he set his mind to developing new and inventive mining and coal extraction machines. He also held classes for mining students. Richard designed and developed new mining machines and he patented a pit-sinking machine, which operated by compressed air and cut a groove all round the sinking shaft in advance of the machine.

In 1892 he developed a more efficient and better-known coal cutting machine. Richard spent the next few years selling these machines to colliery owners, while still continuing his work as a part time colliery manager. He next turned his attention to coal conveying.  Coal was still being loaded by hand into tubs and hauled by boys and ponies which was very laborious and dangerous work and Sutcliffe believed a belt conveyor could be used underground in a mine. In 1905 he decided to goon into production with his own designed belt conveyor and he opened his Engineering Company, called Universal Works, at Horbury.

During 1905 the first six underground conveyors were ordered and constructed by Richard Sutcliffe’s company, and from this the company went on to produce many other types of conveyors and loaders, for around the world. During WW1 Sutcliffe’s Engineering Works was given a contract to produce artillery shrapnel shell casings and turned out 2500 shells cases per week.  Because of staff shortages, women, young men and girls and disabled persons were employed there for the first time, and a report showed that production had increased when the women joined the workforce. The Company went from strength to strength, and at one time employed 1,110 in total, in a number of plants.

Richard died in 1930 but his Companies continued in operation and managed by his children they diversified into many other areas of engineering, one of these Companies R Sutcliffe Ltd is still in operation today, and produces playground equipment.

Descendants of Richard’s parents still live and farm in this Slieveardagh area.

This interesting and informative piece about this Son of Slieveardagh was put together for www.tipperarycoalmines.ie  by Alma Cooke, who shares a common ancestry with Richard Sutcliffe. Here she has shared the stories of his time in the Slieveardagh coalfield, the Leinster coalfield and his subsequent importance as a developer of underground mining equipment culminating in his most recognised achievement,the invention of the first underground belt conveyor for coal. Sutcliffe was a big man, he was hard-working and had a brilliantly inquiring mind; he learned on the job, took formal instruction and educated future miners to help them improve the efficiency and safety of mining. He took risks, invented machinery and reared his family. His is the story of a miner and also an inventor and we are proud that he came from the Slieveardagh Hills.

We acknowledge and are grateful to www.horburyhistory.org for the image of Richard Sutcliffe and much of the information in this piece.

The Sutcliffe families are connected. Richard lived for a while in Broomhill house. Their arrival in Ireland predated the Palatines who came to Limerick in 1709 and the Slieveradagh area in the 1770’s. Old graves in Freshford graveyard/church

A completely NEW story, surely. Highly educational. Congrats to all concerned! I have been familiar with the name SUTCLIFFE in the Crohane area, and thought they might have been among those immigrants who came from the Rhine Valley in the early 1700s. .

Please allow a few minutes and refresh the page to see your comment.
Oops! Something went wrong while adding your comment. Please try again later.
626534fb67858f67358eafa1