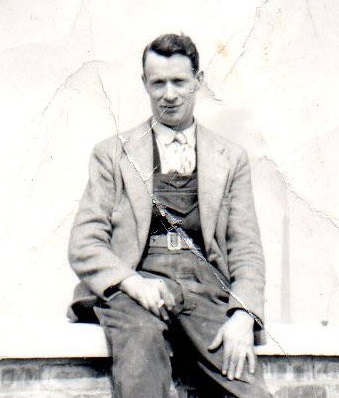 Jim O'Rourke's daughter Johanne O’Rourke Corbett, shares some of the the O’Rourke family’s history of their involvement with the local coal mines.

‘Our dad Jim O’Rourke worked in both Ballingarry and Gurteen before moving the family to the UK in 1955. Dad also had a shop at both mines, he was a joiner by trade but also worked as an electrician.’

‘Our Mum, Alice née Lawlor worked in the shop in Ballingarry mines with the help of our cousin Carmel Walsh and my brother Murt (RIP).‘

‘The shop in Gurteen was also staffed with near neighbours and cousins. The shops stocked most everything required for day to day living including clothing suitable for miners. I was too young to be involved but enjoyed being allowed to serve the ice cream. After we came to Manchester I met a lot of people, some ex miners, over the years who remembered me from the shop.

Another memory of Dad, he worked in the sawmills (saw-house)at Ballingarry mines with Jim Brown who lived in the village. I can’t remember any other names other than the secretary whose name I think was Miss Sheridan’.

Johanne’s older brother Sam worked for the mines before moving to Wales.

Sam and Johanne have shared two important artefacts, pay-packets belonging to Sam from when he worked in the mines in Ballingarry.

The older pay packet is from Mianrai Teoranta, the state run colliery that had mined in Ballynunty from 1942 before moving its operation to Clashduff in 1948. This pay packet is dated 19th March 1954 and Sam received £1-0-10.

The second pay packet dated 1955 is from Tommy O’Brien ‘Ballingarry Collieries Limited’. O’Brien bought the mining rights from the state and worked Clashduff before opening Gurteen Mine.

‍‘Sam also worked in Gurteen with our Uncles George's son Sam in 1954 driving the crank in Gurteen’. That year the two Sams were part of the effort that opened a passage into the ground to make the sloped entrance to the new mine.

On the week ending 6th February 1955 Sam earned £12/8/11 after 1/6” deducted for light and another 11/9” for explosives, so at this stage Sam was working as a fireman setting the explosives (used to blast through and break up rock, stone and coal underground).

Johanne goes on to explain:

‘Uncle George and Sam were also O’Rourke’s. It’s a bit confusing at times as there was three brothers (my father Jim, George and Jack O’Rourke) all living on the same road in Clashduff; and all had a son called Sam and my aunt Bridget Barry had a son Sam too. My Grandma (Mama) Bridget née Webster O’Rourke also lived on that road. It should have been called O’Rourke’s Ville!’

In 1955 Sam left Ballingarry to work in Wales with some cousins, and soon after that his father Jim also moved with the rest of the family to the UK.

To Sam in Galway and Johanne in Manchester we trust you are both enjoying your retirement (Johanne does get over regularly to visit Sam in Galway and her daughters in Glengoole). Thank you for sharing the photographs and all the information especially the great first-hand record of the shops set up near the mine entrances from Johanne, and the pay packets from Sam.

Anyone with more memories or pictures to share please send them on via the blog, Facebook, or to tippmines@gmail.com

Great record of the O Rourke family connection to the mines and the shop. This is great to have on record for all to see.Thank you all for sharing same.

Great photos joanne,They bring back a lot of memories. It was a very hard life for our relatives who worked in the mines.. thank you for sharing xx.

Lovely to read this,thanks for sharing ..

Please allow a few minutes and refresh the page to see your comment.
Oops! Something went wrong while adding your comment. Please try again later.
63493caaa695030ff859de2e