The Social Scene part 2 'Entertainment in the Village' 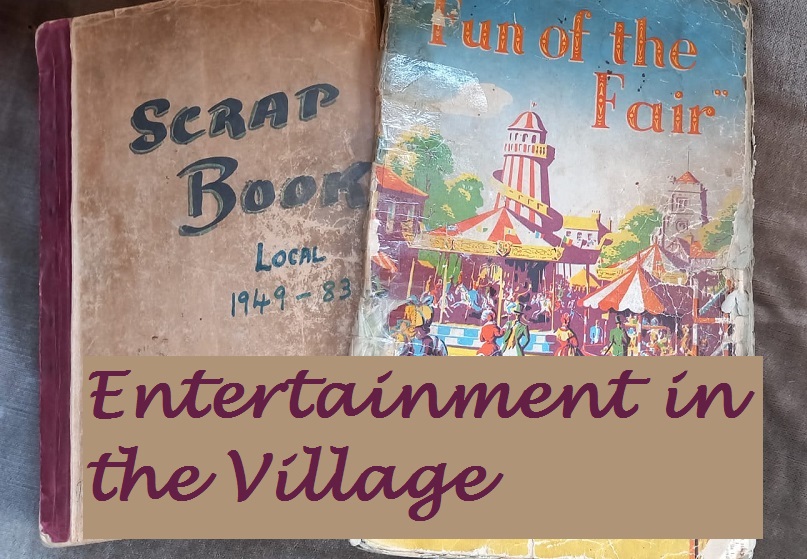 The Social Scene part 2 Entertainment in the Village

Today Billy reads the second part of his father Michael Barron's recollections of village life in the 1920s to the 1970s.

2. Entertainment in the Village

There was a very good local dramatic society in the village which staged an annual concert in the convent hall.  This hall doubled as classrooms during the day, but had a permanent stage and the added attraction of having electric light. These concerts consisted of a three act drama with plenty of singing,dancing and music to suit everyone’s taste, and the infant classroom served as a dressing-room and make-up department.

Several stage and picture shows made regular visits to Ballingarry.  They were nearly all family run shows and were held in a tent which they put up in a field near the village.  They lived in beautiful caravans often pulled by horses, and had a generator to provide electric light.  The entertainment consisted of a silent film with background music, and the captions and conversation would be read aloud by most of the audience.  This would be followed by a stage-show of sketches and songs and topped off with an episode of a serial which always finished at a thrilling moment and left you guessing until the next night if the tragedy really occurred. But it never did!

‍The talkies gradually replaced the silent films and a lot of the magic was gone forever, and everyone had to stay very quiet during the performance.  There was the odd circus which honoured the village with a visit, perhaps once a year. This outfit would not be of the same standard as the big-name ones, infact the only animal in one so called circus was a performing goat. But they gave good value and were very much enjoyed by all.

Ballingarry didn’t have much in buildings which could be used for social activities, and so had to make do with what was on offer. Whist-drives were run by different committees in a big room which was over the sacristy of the church.  This was also used for meetings, and at one stage, a carpentry class was held therefor the D.I.Y enthusiasts, during one winter.

The public-houses were completely male-orientated and the wives could only guess at what went on inside and grouse over what was keeping himself so long.  But as stout cost only 10d for a pint bottle, (Known as a ‘ten-penny’} and cigarettes at sixpence for ten (or woodbines for two-pence for five), a man didn’t have to be a millionaire to spend an hour or two in congenial company, while she tried to keep his dinner warm over an open fire.

Ballingarry boasted of six pubs in the village and there were country pubs conveniently spaced outside the three mile limit for Sunday booze-ups.

Tipperary Historical Society has an interesting article about metal mining in Tipperary including Silvermines and Coppermines places? An index of articles in their journals is online - see Tipperary Studies, part of the TIpperary Library service online?

Michael Barron's 'The Social Scene' was written into an old copy book belonging to his son Billy, and is not from a published book. Billy reads it in six sections also available as a text in each blog.

Well done to all on these lovely memories which are unfortunately gone forever, where could I get this book ?

Billy, thanks a mill. Both your late dad and the late Tom Cormack produced some great dramatics, at least once if not twice per year.

Well done Billy, A great recall of your father's lovely words. What great foresight he had and how lucky we are that they survived and that we have such read access to them. May it be always so.

Please allow a few minutes and refresh the page to see your comment.
Oops! Something went wrong while adding your comment. Please try again later.
62fa3cd00060d8d62b24fdfc