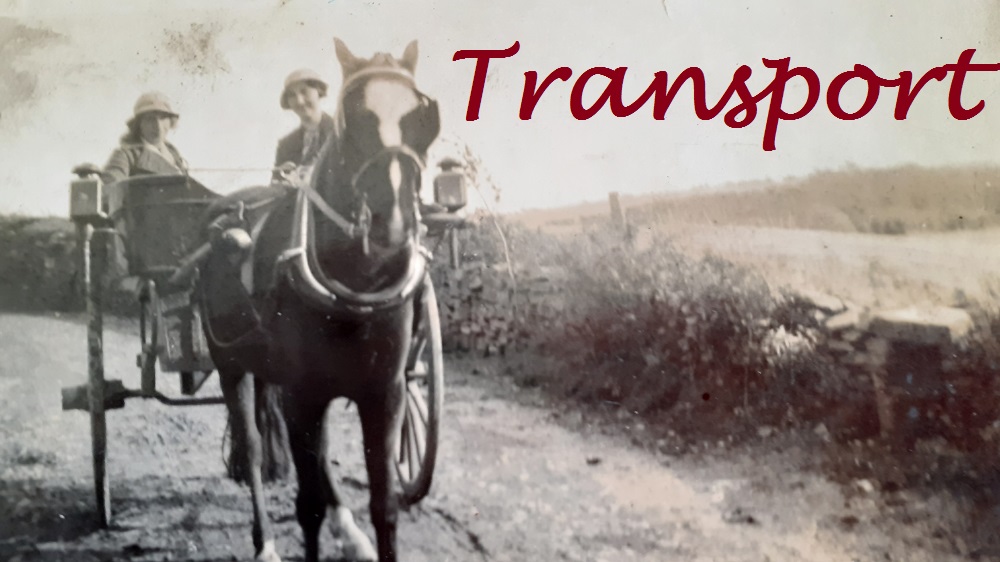 During the war-years, almost everything was in short supply and the scarcity of petrol confined travellers to those places which could be reached by bicycle.

Callan was the venue for dancers and cinema goers, and often on Sunday evenings twenty or thirty cyclists could be seen leaving the village for the Parochial Hall or Egan’s Cinema. Another venue for the cyclists was the dance platform which was very popular during the war years.  These were open-air dance-floors located at cross-roads if space was available, or in small fields or groves, and would attract dancers from as far away as then or fifteen miles.  The bands would be usually very good and progression was made from those platforms to the large post-war dance halls and ballrooms of romance.

Thank you to Paddy O'Connell  for sharing the Grand Opening Dance poster and to Martin Maher who, when he saw the first part of Michael's recollections shared the image of the St Patrick's Night Grand Dance poster and gave permission for it to be included in the blogs. We will return to the halls later in the recollections!

If anyone has any more photographs or other pictures from the area at this time and are happy to share them please do so either online or at The Old School,The Commons, which will be open this Saturday 20th August 3pm to 5pm. Images will be on exhibition, along with the artefacts, models, maps and photographs in the exhibition space that was improved during the Covid Lockdowns.

‍Another big occasion for the Ballingarry cyclist was the Sunday of the big match in Thurles.  After early Mass and a quick breakfast, the crowds would collect in the village, and like the migrating swallows, would leave en-mass for Thurles. This would be really a day out, for when the match was over, a meal and light refreshments would be obtained and no one would be in a hurry home except the few that would have to go home to milk. The lucky ones stayed around the town being entertained by the visiting Cork or Limerick supporters who usually came by train.  Then at a fairly late hour everyone set out for home, and no one found the journey long because of the crowd travelling together.  Our local doctor had an even better way to get to the match.  He was allowed to drive his car only in his own district, so Munster Final day he put his bicycle in the boot, drove to the limit of his area, put the car in a friend’s yard, and cycled the rest of the journey.

One thing Ballingarry could boast of in the twenties and early thirties was a regular bus-service to Kilkenny.  This bus which was owned by a local man was really a big motor-car, an eight or ten-seater model T Ford, with a soft hood which could be folded back if the weather permitted.  I doubt if people went shopping in it on a regular basis.  They probably went on the annual Christmas shopping-spree of for the buying of the odd suit or coat after the harvest.  But the visitor to the neighbourhood who got as far as Kilkenny by I.O.C. coach or train, usually finished the journey in the local bus. By the way, the last journey that bus ever made was to the Eucharistic Congress in Dublin in 1932.  It used 13/4 worth of petrol for the journeyand £7 profit was made from the passengers.

Private motor-cars were non-existent in those days.  There were one or two hackney-cars and maybe the local doctor or priest had one. People did not do much travelling, a funeral of a relative or a visit to a hospital to see a patient.  Most births and deaths occurred in the home, and the horse and trap sufficed for the short trip to the Church or graveyard.

Of course the little donkey had a very important role to play everyday in bringing the milk to the creamery.  This was a major social occasion for friends to meet, and even if it took half a day to get there and back, well no one was in a hurry anyway. The horse was always an important member of the household.  Not only did he get the family out to Mass, and to the shop and to visit – the latter a most important occasion and way of life- but he also worked each day ploughing, harrowing, sowing, cutting hay and corn, in fact anything that had wheels also had some way of connecting it to a horse.  The notable exception was the pram!

The first break the horse got was the advent of the tractor.  Both tractors and cars began to get plentiful in the thirties. One remembers the baby Ford car which could be purchased new for £130.  You then had to pay £8 road tax, £5 insurance and the large sum of 1/4d for a gallon of petrol (with the best grade 1/9d)  People were just beginning to realise that Dublin and Cork really existed and that Tramore could be reached in a day and home again, rather than spending the necessary week there as people did hitherto.

‍Then in 1939, Hitler put an end to their gallop, and the horse and donkey came into prominence again and did the galloping for the war-years.

A Great Read of nostalgia

Please allow a few minutes and refresh the page to see your comment.
Oops! Something went wrong while adding your comment. Please try again later.
62fbf34f0b942d668bfe2b77