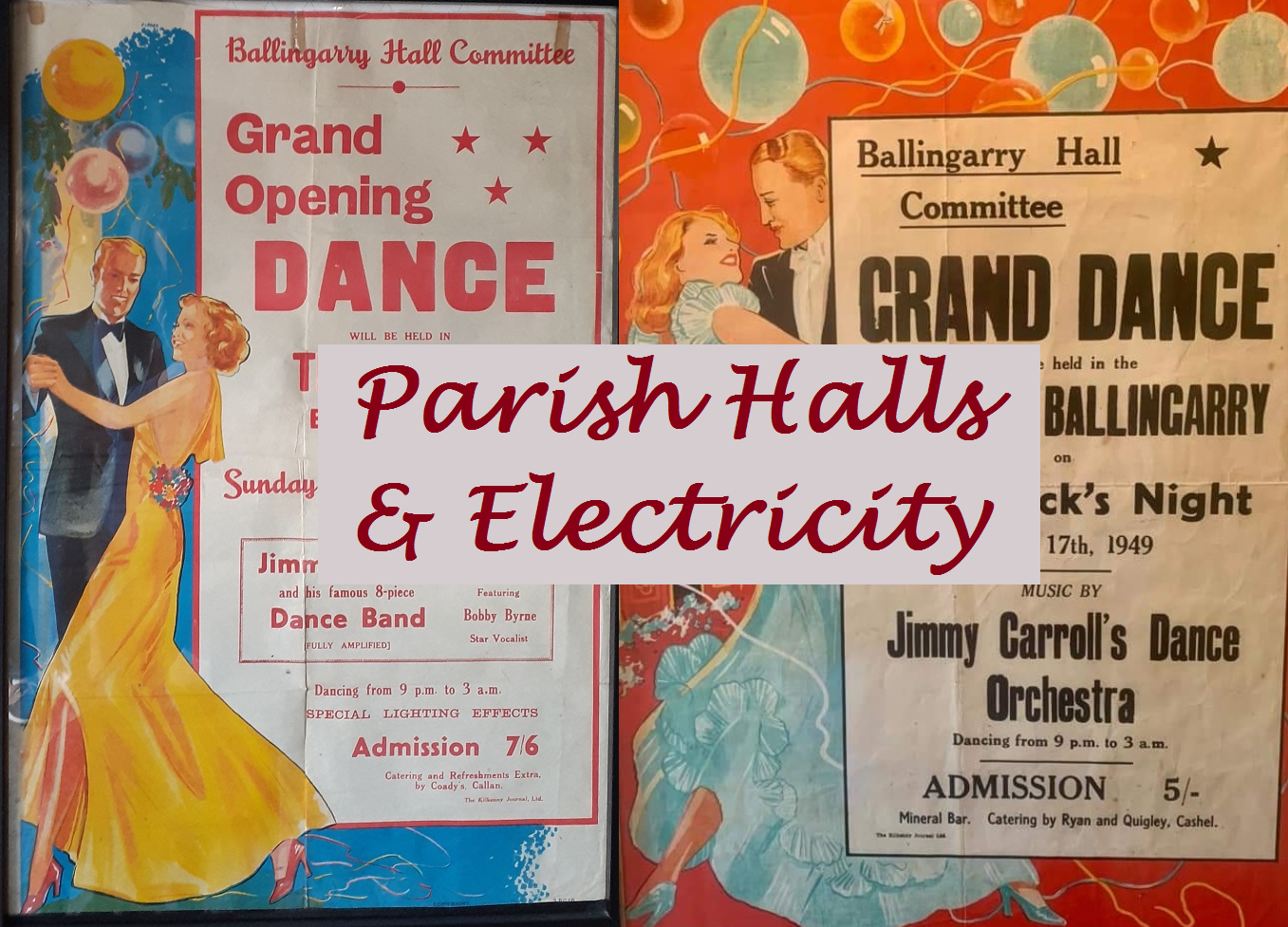 Posters for dances in the New Hall in the 1940's

Today Billy Barron reads the 5th part of his father Michael Barron's recollections 'The Social Scene' - Parish Halls and Electricity. Now the memories are mostly about life in the 1950's and 1960's!

After the war, when things began to get back to normal, and petrol and cigarettes,tea and sugar got plentiful again, people began to shake off the shackles of the emergency.

‍In 1948 a local group got together with the idea of opening a dance-hall in Ballingarry.  The buildings already existed as part of a farm layout with a frontage onto the main street, and all that was needed was a few months work to convert them into a presentable dance-hall. The opening dance was held on Sunday night November 7th, 1948, and for the princely sum of 7/6d, you could dance to the strains of Jimmy Carroll and his eight piece dance-band from 9pm to 3am, with the catering in the capable hands of Coadys of Callan.  For the first few months of its existence, the New Hall, as it was known, was lighted by a generator which also supplied power for weekly film shows.

In March 1948 a big event happened in Ballingarry.  E.S.B. light and power was made available, the fifth rural area to be serviced in the country.  Our local Parish Priest pressed down the switch to light the first lamp,  some ESB engineers went from house to house putting in fuses and  the dust and cobwebs which lay hidden forages were revealed.  Then there was a demonstration in the hall of all the appliances that were available to the lucky housewives, and the day of the electric kettle and iron had dawned in the district.

The New Hall flourished for many years and supplied the needs of the community with dances, film shows, variety shows, and meetings of all kinds.  One of the highlights on the dancing calendar was the annual Beauty Dance held on New Year’s night.  This was the night when each girl at the dance hoped to be one of the three finalists and carry off one of the lovely trophies, and I might add that fairly frequently some local girl was one of the lucky ones.

Having a local hall was the prime factor in the formation of a drama group in 1954.  First-class talent was freely available, and a very good variety and musical show was put on the road.

During its existence, the group played to packed halls not only in Ballingarry but also visited the neighbouring towns and villages, and did quite a lot of fund-raising.

It was disbanded but was revived again in the late ‘60’s.  By this time the hall had closed down, but the old national school became the home of the variety group for many years.  A permanent stage was built, and first class lighting was installed, and the hall was fully seated, but as space was rather limited, each show was put on several nights in succession to give everyone an opportunity of seeing it.  It was in this little hall also that bingo was inaugurated, and still the weekly sessions of this game are very much appreciated.

Most of the money earned by the variety group was put into a Parish Hall fund down through the years, and in 1970-71 this fund was augmented by other fund raising events such as 300 and 400 clubs.

Carroll System Buildings gave a prefab-house which was first prize in a raffle which was run in 1968, and the lucky winner got the house erected on the site of their choice for one shilling. Second prize was five tons of Ballingarry anthracite delivered anywhere in the Republic.  The fund grew over the years until 1971 when work commenced on the present hall.  It was completed in  May 1972, and was opened on June 2nd 1972 with a full week’s programme of dances, concerts, bingo, whist-drives and etc.

The 'post-war' community in Ballingarry had in just over 20 years, purpose built the hall which is still in use today. Today's hall committee still ensure it is a clean and welcoming facility available for use by the community. It is a pity that over 50 years later that pre-fabricated houses could not be made more readily available.

No items found.
Please allow a few minutes and refresh the page to see your comment.
Oops! Something went wrong while adding your comment. Please try again later.
62fcf79dc1e79a0acd9b31ef