The Social Scene part 6 New Developments in the 1970's 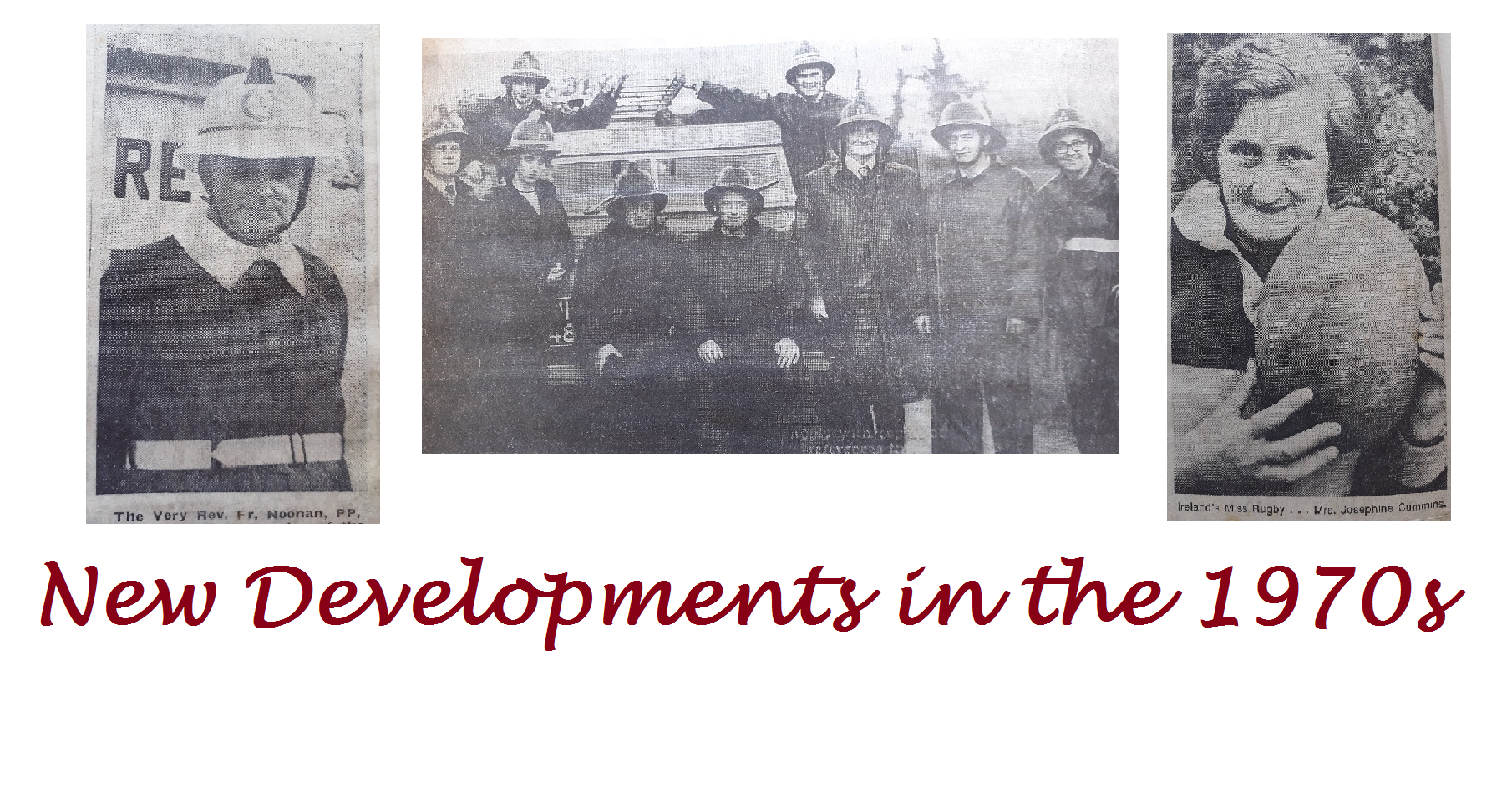 The Fire-fighting Unit and The Ballingarry Wasps

In 1970 a rugby club was formed and named Ballingarry Wasps.  This was a new enterprise in an area which had been for ninety years the staunch supporter of our national games.

A field was obtained in Knockinkit which served as a rugby pitch, and dances to finance the club were held once monthly in the Urlingford Arms Hotel.‍

In 1972 a five acre field was purchased in Kyle and on October 8th 1972 the new clubhouse was opened.‍

In 1971, a voluntary fire-fighting unit was installed in Ballingarry, and proved a very, very welcome service in an area which was far removed from existing brigades.

The initial unit was a trailer containing a portable pump, ladder and hoses which had to be pulled by someone’s private car.

Later on a van was supplied, and in 1976 a Land Rover was supplied with built-in pump and water tank and all other necessary equipment.  This unit has proved its worth hundreds of times over the years.

Another welcome amenity which began in Ballingarry in 1972 was a branch library which is situated in the old dispensary.  There were 600 books supplied initially, and those are changed by Thurles library every two months. Another service which has lately been installed in the old dispensary is a branch of Callan Credit Union and this is being widely availed of by the residents of the district.  Of course, this is a follow-up to the very successful branch of Allied Irish Banks which has been operating in the village for over fifty years.

So, looking back over that number of years, Ballingarry has been quite a swinging spot.

And that is where Michael Barron finished 'The Social Scene'.

Paddy O'Connell generously shared photographs and press cuttings he has collected over the years, adding to Michael's recollections with more great images.

Margaret O'Brien realised the importance of Michael's 'The Social Scene' both for the local area and as very relevant piece of 20th century heritage. She also typed up 'The Social Scene' from the original handwritten text, and located the images used throughout the blogs.

Katy Goodhue recorded Billy reading 'The Social Scene' and assembled both the videos and the daily blogs.

Thank you to the people who shared information and images during the week that were then included in later blogs, and everyone who took the time to follow the blog, like it or share it on to a wider audience.

And most importantly, we thank the Barron Family, especially Billy for sharing Michael's writings and photographs on the Tipperary Coalmines website, and with everyone who chooses to view it.

This series of six blogs is a Heritage Week 2022 project. We are grateful for the continued interest and support from the Heritage Council and Tipperary heritage Office in our efforts to save and record the Coal Mining Heritage of the Slieveardagh Hills.

Congratulations on an excellent depiction of the social scene in the parish of Ballingarry.

Please allow a few minutes and refresh the page to see your comment.
Oops! Something went wrong while adding your comment. Please try again later.
62ff86fb9e1970de48a22a2b