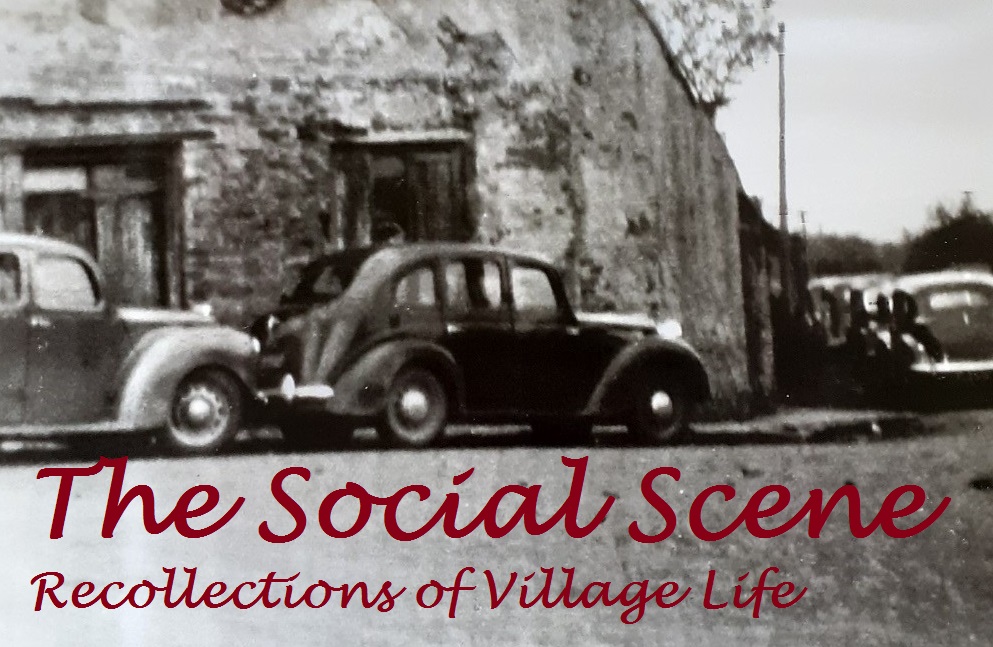 The Social Scene is the recollections of Michael Barron about the social events and entertainment in his village Ballingarry from the 1920s to the 1970s. Michael's son Billy Barron reads his father's memoir.

The coal-mining industry was the main employer in the Slieveardagh Hills in the mid-20th Century. The men who worked for the mines reared families, contributed to the community and also had a social life. Over the years this extremely observant and creative man Michael Barron photographed the local area and then put pen to paper to record the changes in the local social life over a period of 50 years.

This is the story of the coal mining village of Ballingarry, but it could anywhere in Ireland in the 20th Century.

Michael Barron was an only child, his mother Kate was the local midwife so also had a hand in the arrival of children in many of the houses. She drove a car when mainly there were only hackneys and the occasional priest’s or doctor’s car onthe roads.

Michael went to Rockwell College and on leaving school he trained as a dispensing chemist in Maher’s Dispensing Chemist in Mullinahone, there he also learned to develop photographs and eventually set up a dispensary in Ballingarry. With a growing family and the opportunity of work in the local mines he took a job in the office of Ballingarry Collieries Ltd. The office was not for Michael and he decided to give driving for the mines a go, and spent the next 20 years driving a coal lorry and delivering coal all over the country.

The way of life in Ballingarry in the 1920s was very different from our modern life-style, and everything moved at a very leisurely pace.  It was pre-war, pre-television, even pre-radio.  The only canned music available was the gramophone, with or without a horn.  There was the little portable, like a suitcase, then there was the common table model which had a large horn over the turntable to amplify the sound from the sound box.  The posher ones had the horn built into the cabinet and the super ones had four legs and a place for the records.  Of course they all had the necessary handle at the side for winding up the motor, and the most important item was the box of needles.  This was a vital necessity for an evening’s music, as a new needle had to be inserted in the sound box after so many records were played.  The gold needles played ten and others only two. The records themselves which varied from John McCormack to the McNulty family were fairly easily come by, as most people swapped their lot with the neighbours, but a trip to town was often necessary to buy the little box of needles with the picture on the lid of the little white dog sitting in front o fa gramophone listening to “His Master’s Voice”.

Apart from playing the gramophone, another popular form of entertainment was the house-dance.  The excuse for having a house dance was, to say the least, very flimsy. Almost anything out of the ordinary constituted an occasion to hold one,such as visitors to a house, someone of the family home from somewhere, or always the person going away, either emigrating, or entering a convent or college.  How the word got around about the dance is somewhat of a mystery, but people got to hear it and came in their dozens, and often the people of the house concerned only copped-on when they found themselves up to their elbows in neighbours.  The music was never a problem as there was some musical instrument in every house, or the local expert carried his melodeon under his arm at all times, and a great nights dancing was had by all when a few musicians got together.  Set dances and “Cashel sets” were the most popular with an odd waltz thrown in, and dare I say it, even a fox-trot was known to be performed on occasion.  These dances were very often combined with a session of card-playing known as a “gamble” for the older citizens, with a prize of a goose or a turkey going to the winner.  Christmas was usually a time for playing for the turkeys and chickens.

About once or twice a year, there was the big occasion of the Creamery dance.  This was either a hurling dance or maybe apolitical one, and was held in the large galvanised-iron building then known as the egg-store.  For a week beforehand the dance committee got together to clear out the store and prepare it for the big night.  A platform for the band would be erected on the ground floor, while upstairs the ladies committee would busy themselves with the supper-room, providing oil-stoves, kettles, teapots etc. to cater for hungry customers.  And as the dances went on all night from 9 o clock to five or six in the morning, everyone was treated to tea at least twice during the night. AND ALL FOR HALF A CROWN!!!

Very interesting Billy, never knew your dad was into all that sort of recording local history.

Please allow a few minutes and refresh the page to see your comment.
Oops! Something went wrong while adding your comment. Please try again later.
62f8b826ae39b4e3a1192733