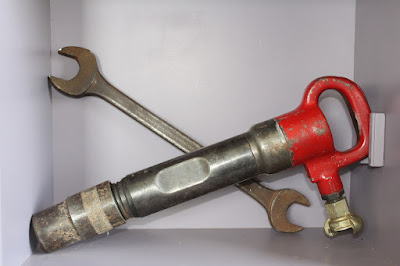 Today is the last day of Heritage Week 2021 where day by day we have brought you on a Virtual Field Trip of the Slieveardagh Coalfield. We have used a blog platform so everything we have put up and mostly shared through Facebook pages is there to stay and we plan to add to it. We have an interview with the last man down Foilacamin Shaft, and   'culm balls' and 'tallys' all to come soon.

We are revisiting the film T'was a Terrible Hard Work today, it was made in 2009.

This award winning short film animated and directed by David Quin is about coal mining in the Slieveardagh Coalfield. It features the voices of local miners Michael Heaphy, Tony Ivors, Nicholas Morrisey, Joe McEnery and Sean Lyons  who shared some of the mining history and their memories. These men told these stories over a decade ago and this film is proof of the importance of continuing to collect and record our mining history. These men represent the mining community all of whom we wish to remember.

And now our tour guide Michael 'King 'Cleere comes up out of the mines, but doesn't get past the local shop! Michael's interest in remembering and sharing the local history has educated and entertained groups since he lead our first Heritage Week tour in 2015. He still has more to tell...

There is always more to find out and we thank all the people who are following the blog and especially those who shared photographs and their memories during the week. If you come across any more history of the mines we can include it here.

Today our new messages include the memory 'miners as black as the coal, the miner who came to work for his brother, and the miner who locked the door on the last day and kept the key!

Thank you to Margaret Molloy who tells us 'Manys the evening I sat in the car waiting to see the wheel turning bringing up the Bogey out of the mines at (the) end of (the) shift full of miners as black as the coal.

Margaret's great visual memory is of Gurteen. The offices and car park were up a hill from mine yard so she could watch the winch wheel for it's movement knowing that the miners would soon be up and finished their shift.

Kelvin O'Brien's father Terence was one of Tommy O'Brien of Ballingarry Collieries Ltd. brothers. Along with his other brother Frank, Terence came over from St Helen's in England. Terence had become an experienced miner in Sutton Manor and Bold Colliery. Kelvin moved with his family to Clashduff at the age of two living there at the mine entrance until the family moved to Clonmel. Kelvin shared a picture of Terence taken when he was working in St Helen's.

This picture reminds us that miners were young men, often 'going down' when they were as young as 14 years old.

And the Key.... Heritage week's theme is 'Open the Door to Heritage'!

Michael Moroney shared a fascinating story about a friend in Galway with an heirloom key.

The big key with which his grandfather closed the mines hung above the fireplace in Galway for years afterwards.... and is still in the Hickey family.... Tom Hickey died about 1963, aged 83.

We don't know which mine he might have closed... Knockalonga in Coalbrook worked untill about 1910, so he would have been the right age to be working there. Ballingarry Coal Mining Company was working at Woodpit or Copper in 1898, again we don't know when it ceased operating so maybe Tom Hickey closed one or other of these mines. Do you know more about Tom Hickey?

And finally, if there are any miners wives or children (or miners, or their neighbours) who would be interested in sharing their memories and stories of the mining times,  please contact us through either the blog or our Facebook page or at tippmines@gmail.com

We also want to collect and share more photographs, and record the names and dates of the Miners of the Slieveardagh Coalfield.

No items found.
Please allow a few minutes and refresh the page to see your comment.
Oops! Something went wrong while adding your comment. Please try again later.
6257df121bce736befcfa10a