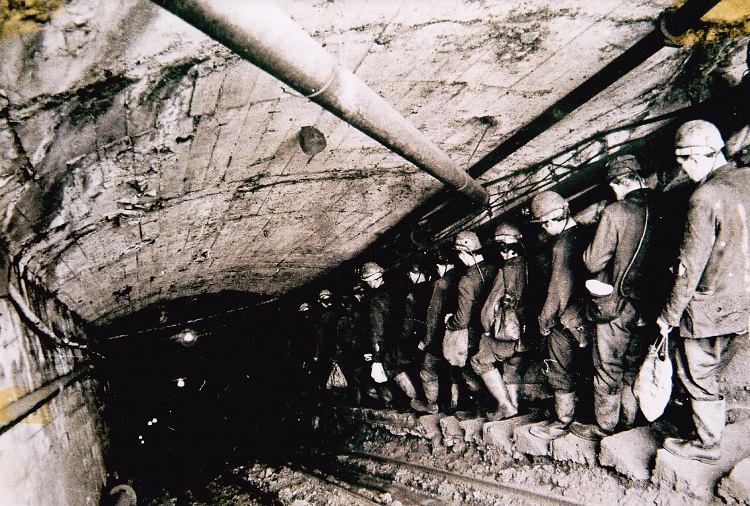 Going down the Crank

In 1952 the mining lease for the Slieveardagh Coalfield area was purchased from the government by Tommy O’Brien for £50,000.  There was a great quantity of unsold coal and culm on the surface and it is said that through selling this the purchase price was recouped within twelve months of taking over the lease. Ballingarry Collieries (Production) Ltd, operated from 1957 until its final closure in 1972 and was the largest employer in the area during the 1960’s.

Tommy O’Brien was originally from Mayo and had worked with his father and brothers in the mines in Lancashire in England, he brought his knowledge of the latest innovations in mining with him to Tipperary. The mine at Ballingarry (Clashduff) was worked until 1957 then operations were moved to Gurteen, and coal was extracted there till 1973.  A top quality seam of anthracite was soon being worked and new pumping equipment to overcome flooding was installed.

Ballingary Collieries utilised much of the coalfield. Coal was extracted underground at initially at Ballingarry, for most of the life of the company at Gurteen, and at The Spa mine for about a year. The 19th Century mine shaft at Foilacamin was fitted with a submersible pump to keep water away from the workings, and the Lickfinn or Ballynonty adit also from the 19th Century was also used to drain water away from the workings. While in receivership opencast mines were developed at Ballyphilip and Knockinglass but neither sites were productive. In 1976 Tommy O’Brien was still following coal and opened the entrance to the old crank at Lickfinn and has started clearing debris from the Ballynonty adit, but while he was still waiting for a licence to extract coal his health deteriorated and the lease was acquired by his friend and ex-employee Patrick Keating and his partner Gilbert Howley (Kealy Mines).

Within three years of opening the mine there were 330 men working at Gurteen and during the 1960’s there was a maximum count of 360 men in underground extraction and many more men and some women employed above ground.

Gurteen Mine, Ballingarry Colliery provided work for men from the whole Slieveardagh area.

Michael 'King' Cleere tell us about the history of and developments in Gurteen Mine.

This photograph of a miner on his way to work is really special to the history of the mines because there are so few photographs taken (even now) of people in their working clothes. We all want to be photographed in our 'Sunday Best' but someone caught Jimmy on his way out to work!

At Gurteen there was a day shift and an evening shift. The only safety equipment the miners had were their helmets and battery operated lamps, otherwise they provided their own boots and clothing. The lamps were a big improvement on the old carbide lamps as the rechargeable batteries would last a shift and were much less likely to go out unexpectedly. Compressed air was piped underground to operate the equipment the miners used, it also provided some ventilation for the miners and there were air shafts with fans to help draw away the bad air.

The Crank was the entrance to the mine, it had a very steep flight of steps that the underground workers would walk down to start their shift. It also had two sets of tracks for ‘tubs and bogies’ to run on. Tubs of stone, muck and coal were brought up and bogies of wooden posts used by the miners to support the roof of the mined areas, and consumables and equipment for the fitters – underground electricians were taken down.

Underground, in the mine the miners often had to walk more than a mile before they reached where they were working. The underground roads from Gurteen crank ran underground as far as the colliery at Earlshill. So the miners would take food down with them and have their breaks underground and not return to the surface until the end of the shift. There were special tubs or bogies with plank seats that the miners would be brought up in at the end of each shift.

There were many more men working above ground or 'Topside'. These men and a very few women (working in the offices and at the weighbridge) supported the miners underground.

Jobs above ground included working in the office and weighbridge, in the lamp house where the batteries for the lamps were charged between shifts, and at the saw house preparing wood for use underground. Men worked in coal processing above ground - on the landing where the tubs or skip of coal or were emptied, at the washery, where the coal was cleaned and mud and stones removed, on the gantry where the coal was graded and  at the bagging yard. Other essential jobs included working with the electrics for the mine- at the compressor house, and in the fitters stores. Men worked in the oil shed, the garage, the boiler house and there were men who drove the tractors, loaders and dumpers around the site and also delivery lorries and the mine bus.

Gurteen was a big operation when it was working.

In 1962 the company also set up a mine at the southern end of the Commons, this mine was known locally as The Spa and the working conditions were very difficult because the area had very poor drainage and the seam was shallow and too near the surface to prevent collapses of the mine roads. The mine was often flooded, and mining ceased after only 12 months in operation.

Tragedy in Gurteen mine

In 1964 mine manager Mr Gannon was trapped and drowned when the mine was breached by water from old mine workings.

Electrician Christy Lawlor was manning the pumps at Foilacamin, an old 19th century mine with a vertical shaft. The water was continually pumped up and out of the workings, and when the breach happened the water stopped coming up from the pump and he rang over to the mines alerting them to the incident.

Michael Hanrahan was one of the trapped miners that night.

They had been underground since 4.30 and at about 8.30 the miners congregated together and stopped for their tea and sandwiches, Mr Gannon was the manager on the evening shift and along with Tony Joy and Ned Hayes had a break with the others before going to see where the water was seeping through.

Michael and his brother Danny went back to where they were working, Michael was up the 'topple', (the miners worked up into the seam so the coal could be dropped by gravity to the underground roads below) when there was a sudden bang and 'smoke' or dust. The whole road below them was flooded.

Jim Maher, Jimmy Lawlor and fireman Michael Heaphy (a fireman was a miner who set the explosive charges to blast into new area of the mine) were also working above that road and managed to join the Hanrahans up where they were working.

The road below had fallen in, and the water was backed up. Michael says they were in dread that the water would hit the roof and cut off the air but they did still have the air from the compressors they had on their machines. They thought they were doomed and said their prayers, and waited.

After some hours they heard noise. Miners not involved in the incident had managed to let off some of the water and the trapped group were able to escape by holding onto the pipes and climbing over the debris from the fallen road to safety.

When the water had breached the workings Mr Gannon, Tony Joy and Ned Hayes were washed along in the water, tragically Mr Gannon did not survive and was drowned. Ned Hayes was never included in the newspaper reports, but that evening he saved Tony Joy's life. Tony had been washed to a timber behind the road and Ned pulled him out.

Michael says although the incident was devastating in the area they were working, there would never have been enough water to flood the whole of Gurteen as there was so much ground open.

He finished recalling the evening with 'If no one had to go up the road that night there would have been nobody lost'.

Michael and his brother Danny are the only two men involved in the flooding that night that are still alive.

Michael generously recalled this terrifying and traumatic incident for Patrick Lydon in an interview in 2020 for Suir Vision a project Patrick co-ordinated on stories about the water that feeds the Suir river.

It is reported that during the 1960’s at least £500,000 was invested in the company from personal funds and substantial state aid in the form of Technical Assistance Grants.

Attempts were made to use coal cutters underground but the seam was so shallow that it was not viable. The company went into receivership in November 1967, and was operated under this arrangement for the following four years. Liquidation came in September 1972, although the mine continued to be pumped until August 1973. 180 miners lost their jobs and equipment “worth a fortune” was abandoned to flooding.

Wally Mackey spoke to RTE that day and has collected and shared many excellent photographs and articles on Gurteen mine over the years. The television report can be viewed in the RTE online archive. (https://www.rte.ie/archives/2017/0921/906472-ballingarry-coal-mines-to-close/)

Mining stopped at Gurteen in 1972, but the yard was used for storage and grading up until the end of mining in the coalfield in 1989.

In 2020 all that is left of the actual Gurteen Mine site is the mass concrete structure of the ‘Gantry’ that was later used for grading the coal for Lickfinn Mine, the derelict offices, settling tanks and a winch wheel is still in situ.

All the  mine sites are on private property and are not open to the public. Derelict buildings can be dangerous, please do not trespass.