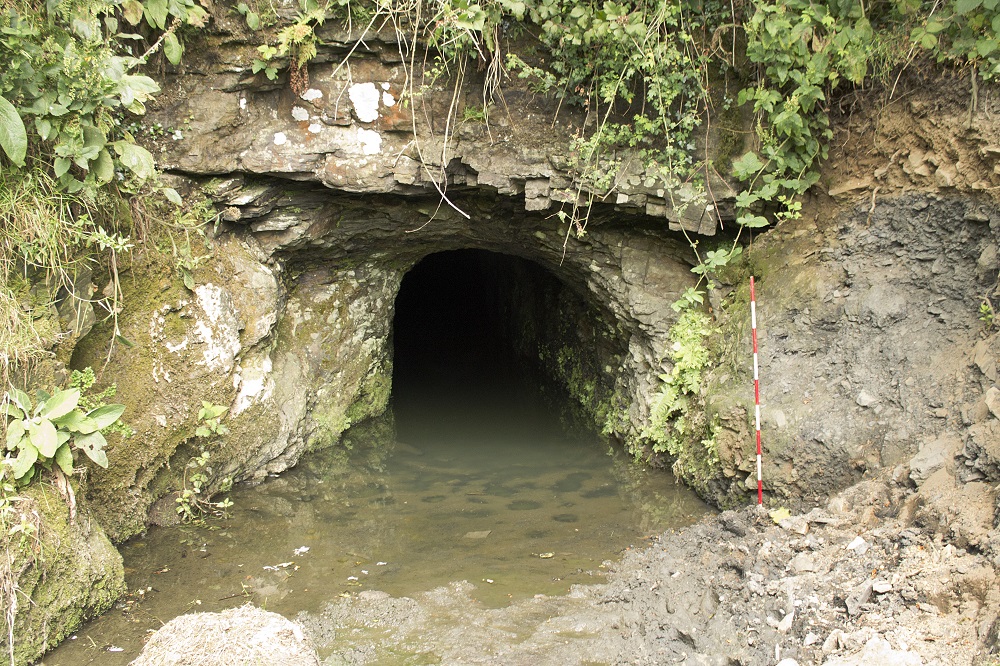 Entrance to Broomhill Drift Mine

Broomhill Drift Mine was entered along a nearly flat passage or road with the water passing out along the same entrance that the miners used. Water is one of the biggest problems facing mines as when it collects in the working area it must be drained off. This can be done by pumping it away which needs specialised equipment and is costly, or as in the case of Broomhill it could be drained away down an underground tunnel or adit.

‍An adit is a near horizontal tunnel driven into the side of a hill.

In 1837 when Samuel Lewis visited to gather information for his Topographical Dictionary of Ireland he noted that Slieveardagh Coalfield lay under 115 different properties ( so there were many small mines being worked) and that ‘the hilly area was very favourable to allow for relatively easy drainage on a small scale’.

There were many small mines worked in the area. More coal could be extracted than would be got from a basset or bell pit as the miners could keep working into the seam propping the roof of the working area as they went.

It is easy to see that the flow of water out of the mine entrance depended on the weather conditions and the time of year. We are told that a mine like Broomhill would probably have been used and returned to over a number of decades.  The men who opened the mine at Broomhill made skilful use of the features of the local landscape of the Slieveardagh Hills to reach coal through a self-draining adit or tunnel. The tunnel is still open and water drains out.

A small building used as offices is still at this site.

Over the 19th Century the typography of the hilly landscape was made use of by not only small mines like Broomhill but also to the main lease holder of the coalfield: the Mining Company of Ireland. The MCI removed water from the mine workings by pumping it to the surface using steam engines housed in large buildings at the collieries. They also invested heavily in excavating underground tunnels (adits) for the sole purpose of draining water from the mines.

See Ballynonty Adit for more information about The Mining Company of Ireland and water drainage.

This mine site is on private property and is not open to the public. Derelict sites can be dangerous, please do not trespass.