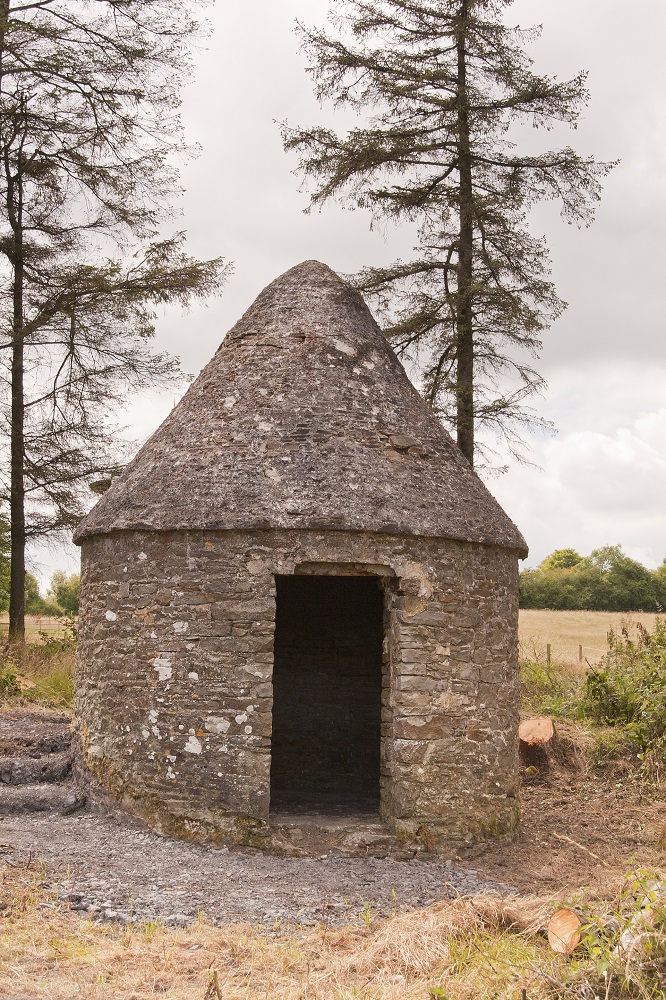 The Powder House at Earlshill is the smallest and most interesting building still standing in the Slieveardagh Coalfield.

In 1844 The Mining Company of Ireland acquired the rights to mine coal in the central deposits of the Slieveardagh Coalfield leasing both Earlshill and Ballyphilip collieries from the local landowner Mr Ambrose Going of Ballyphilip House. It was 20 years since their first lease had been acquired at Mardyke in the southern end of the coalfield and 10 years since they had started work at the northern end of the coal field at Foilacamin and The Commons. Access to more of the rights and the central area allowed the company to develop the coalfield in an organised way. In addition to steam pumping engines to remove water from the mines they opened underground drainage tunnels or adits. The biggest advantage of an adit is once it is kept clear of any debris the water drains 24/7, while a steam engine has to be manned, fuelled and kept running to remove water from the workings. When adits are worked in combination with pumps water can be drawn up to the underground level and let off away from the colliery site, here much of the water drained away was channelled out to Ballynonty mill pond where turned the mill wheel at Brady’s corn mill. Today a steady flow of water still exits the adit at Ballynonty.

Earlshill is believed to have employed the most men at any given time during the 19th Century in the Slieveardagh Coalfield and the spoil heaps still at the site confirm that there was a great amount of material extracted here.  By the second half of 1845 a shaft had been sunk to 44yds or 40.2m. In 1848 Earlshill was the most productive mine in the area as there was a high coal:culm ratio mined from this seam. Along with Mardyke Colliery it was giving a large part of the Mining Company of Ireland’s total production in the coalfield. During the famine years sales dropped but by 1850-52, the stockpile of coal and culm had been cleared.

In 1853 a new engine was bought for Earlshill. There is no ruin of the engine house but we are told that the engines in the Slieveardagh Coalfield were used to raise water from deeper parts of the mines to the adits allowing the water to drain off away from the working areas.

The detailed abandonment plan map from 1886 show two extensive drainage adits at different levels, one at 50 yards and a newer one at 80 yards. The water was drained out along the adits initially to the ground at the eastern edge of the basin, the newer adit took the water in the direction of Glengoole and Lickfinn and out into Ballynunty mill pond.

The Earlshill Lease was for 42 years with the abandonment plans dated 1886.

There are two mine buildings still standing here, the stone powder house and a chimney.

The powder house at Earlshill is believed to be the last example of a Cornish Powder House or Magazine from any coal mining site anywhere in Ireland. The powder house, where the explosives were kept was always an important structure at a mine. It needed to be a secure waterproof building and if there was an accident with the explosives the stone building would hopefully reduce the damage caused by an explosion inside the building. This cylindrical stone corbelled roofed building is the last example of a Cornish powder house at any COAL mining site in Ireland, there is a similar one at Glengowla Mines in Connemara but it is thatched does not have a corbelled roof now, and there they mined silver and lead not coal.

The Chimney at Earlshill is cylindrical, it is believed that it was for ventilation of the workings below. The square indentations running up along it were where the wooden scaffolding that was used in its construction was anchored.