Foilacamin Colliery and Mine Shaft 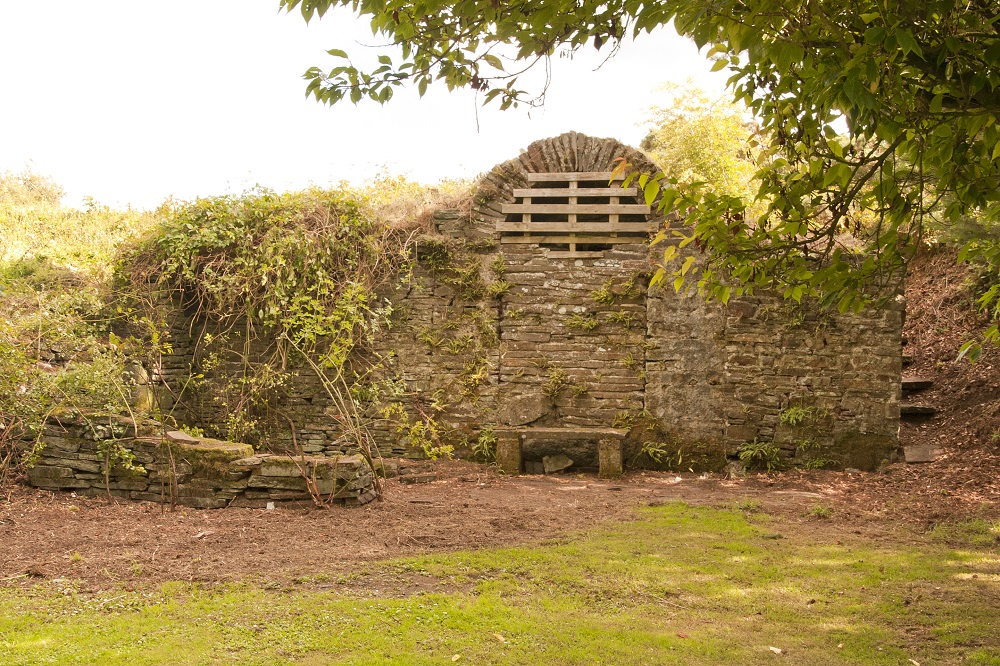 The remaining structure on the Foilacamin Colliery site is the closed off entrance to the mine shaft.

We know that Foilacamin Colliery was leased by the Mining Company of Ireland in 1835 and was worked by them until the late 1880's.

Through cross referencing the Ordnance Survey Ireland Historic Maps we have found out some more information. Foilacamin Colliery and the road the mine site is beside are not on the historic 6" colour map (created some time between 1829 and 1842).

On the later 25” historic map (produced between 1888 and 1913) the Foilacamin site is marked as 'Coalmine Disused'. So between the two mapping times the mine has been worked and abandoned. The road that it is on this later map was probably built as part of the Mining Company of Ireland’s infrastructure plan for the coal field. It makes access to the Commons colliery, leased at the same time quite easy; and also connects to the main road towards the central area of the coalfield.  Today there are still low stone walls running the length of the road in addition to the more usual ditches and hedges.

The mine shaft with the tin shed in front of the entrance where the generator was housed photographed in the early 1980's when the mining activity in the Slieveardagh Coalfield had ceased.

There was also a small forge building and some other small tin sheds at the colliery site. The chimney marked on the map had been taken down earlier in the 20th century and the stone used to build sheds on a nearby farm. A small mine house or office was still standing. There still is a large spoil heap, and the site was also used as a coal yard for some time in the 20th century.

The mine shaft at Foilacamin is 300ft deep and was an important coalfield site in the 20th Century. When Ballingarry Collieries opened the mine at Gurteen in the 1950’s the vertical shaft at Foilacamin was used to house a powerful water pump operated using three phase electricity (with a backup generator in case of mains power cuts). It was manned 24/7 and water was pumped out of the old workings and kept away from the new underground workings at Gurteen.

The men who manned the pump were ‘fitters’ or electricians who mostly worked underground for the mining companies. In this era of mining electricity was central to all the operations, the tools the miners used were powered using compressed air, there were powerful electric ventilation fans in use to draw through air and ventilate the workings, and electric pumps used to remove water to the surface or to underground adits. The coal cutter introduced late in the working of Gurteen Mine also used electricity.

Christy Lawlor, an electrician working for the mines was at Foilacamin the night in 1964 when the water broke through from the old workings to an area being worked for coal at Gurteen. Seven miners were trapped by the influx of water and tragically the mine manager on duty, Mr Gannon was drowned. Christy realised there was a problem when the water stopped coming up from the pump, there was a phone on the site and he rang over to Gurteen to alert them that something had happened. (See the Ballingarry Collieries page for trapped miner Michael Hanrahan’s recollection of the terrifying accident).

Christy’s son Andy Lawlor was born across the road from the Clashduff mine site the same year as it was opened in the 20th Century. Like many sons he followed his father into the mines as a fitter apprenticed at and then working for Ballingarry Colliery from 1964 to it’s closure. He is the last man we know to have gone down the Foilacamin shaft, his task was to maintain the pump.

Andy vividly recalls going down the 100 yard deep shaft (91.4 meters). The section above ground was stone and below that it was ‘squared off’ with big timbers all the way to the bottom, some of the timbers were from the 19th Century and some had been replaced in the 1960’s. To reach the pit bottom the men were individually winched down the shaft standing in a specially made 2’ wide half barrel, a long stick was used to push against the wall of the shaft to keep the barrel from spinning as it went down. There was a ‘false bottom’ about half way down the shaft with four ‘roads’ going off it, one of them may be an adit, or tunnel to drain water. The heavy wooden floor of the false bottom had a trap door below which the shaft continued down vertically with no more roads off it until the actual pit bottom where there were more roads again. Andy also remembers in addition to the electric pumps he worked on there was also a big steel steam pump from an earlier period still in situ at the bottom of the shaft. The spanners use to maintain the steam pump were wrapped in canvas and stored up in the timbers above the pump, Andy took them down and looked at them then put them back where they had been left many decades before. The most striking memory Andy recalled was that there were five small wooden tubs full of coal still at the bottom of the shaft. The wood was still quite sound as a carpenter with him sawed into one and sawdust came out. We have no idea why five full tubs would have been abandoned at the pit bottom at the end of the 18th century.

The disused mine at Foilacamin still has a large spoil heap on the site. A small mine house or office has been incorporated into a bigger house. The shaft has been capped with concrete and the entrance bricked up using stone from other small buildings that were on the site.

This mine area is an interesting example of the cyclical activity of mining., It, like many of the other colliery sites in the area was returned to on more than one occasion. Today except for the presence of the shaft and spoil heap it would be difficult to realise that it had ever been a busy industrial site.