The Mining Company of Ireland 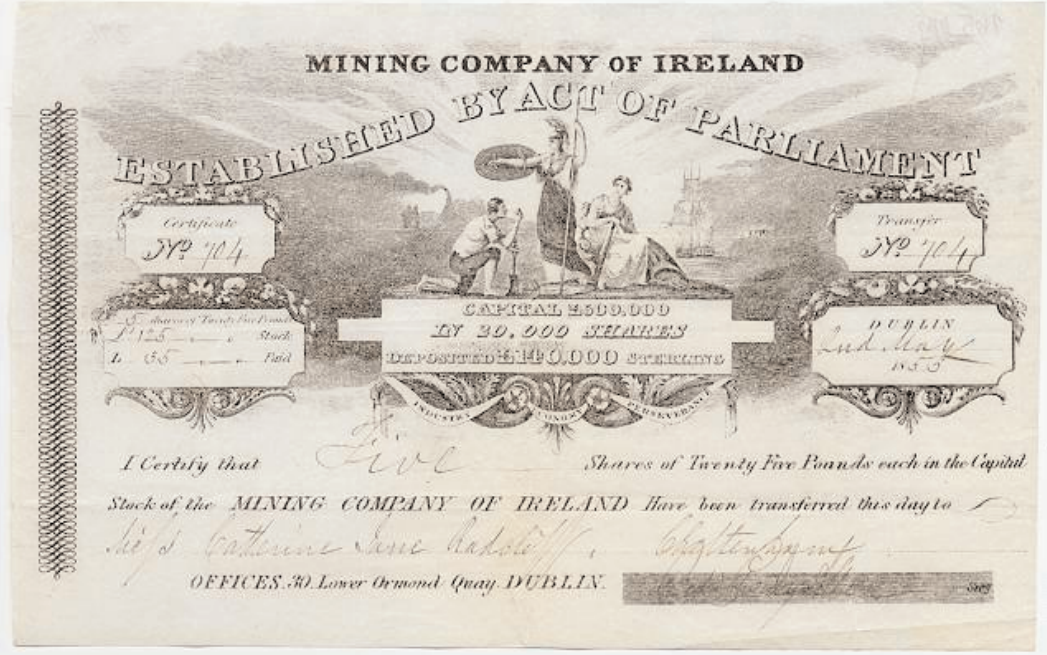 In 1824 the Mining Company of Ireland was formed by an Act of Parliament and operated until 1926, Many of its directors were Quakers, and one of its stated purposes was ‘the benevolent generation of employment for the Peasantry and Poor in general’. It was one of five companies founded at this time involved leasing rights and developing the infrastructure to mine minerals round the country.

The Slieveardagh Coalfield lay under many properties the Mining Company of Ireland had capital to invest and recognised that to develop the coalfield it had to acquire leases across the Slieveardagh Hills. It is estimated that in the early 1800’s there were 35 “collieries” in the area employing 1000 men so there was plenty of mining activity in the area but the coalfield was not well developed. In 1825 the MCI started to lease rights to mine coal and was still developing the infrastructure and working the field up until 1886.

Operations began in the south of the coalfield at Coolquill and Mardyke, it reopened Coolquill Colliery in 1825 closing it again in 1827. The colliery at Mardyke leased in 1826 was the Mining Company of Ireland’s first big development in the area.  Over the next five years it had not only built the mine buildings and was operating the colliery, it also built a village of twenty five good slate roofed houses for the miners, a police barracks and a school recognised as the First miners village in Ireland.

Even though the infrastructure was impressive the miners life was very hard and there was a miners strike at Mardyke in 1828.

In 1833 the miners met poor quality coal made up of 70% culm, the main use for the culm was in lime kilns and mining ceased full time. This is not unusual in mines and surveys would have continued- exploring ways of reaching better coa,l and a new shaft was driven at Mardyke in the second half of 1834, it is still mentioned as being worked in reports in 1849.

By 1835 The Mining Company of Ireland had acquired leases in the north of the coalfield to mine in The Commons and at Foilacamin.

Again it developed the area, putting in a new road for access to the Foilacamin colliery and building extensively at the Commons Colliery. A report in 1837 by Samuel Lewis tells there were nearly 100 newly built houses in the Ballingarry area, mainly inhabited by people connected with the nearby coal mines. In the 1851 census the Commons was the most populated village in the area. The two story school was built in 1877 and is now a community centre and home to the Old School Mining Museum.

In 1844 the Mining company also obtained the rights to mine the central deposits at Earlshill and Ballyphillip. Having access to so much of the coalfield gave the MCI the opportunity to plan on a big scale.

Water has to be kept away from mine workings and was pumped out using steam engines kept in big purpose built houses. The steam engines had to be manned 24/7, they also could only raise water from a small area of the workings. Because it is hilly here another way of draining water from the mines was to open adits. An adit is a near horizontal tunnel driven into the side of a hill, it channelled water to drain out and also gave some natural ventilation underground. So in the 1840’s the Mining Company of Ireland started a drainage level out from the central area of the coalfield.

The Slieveardagh Anthracite was non-flaming, and therefore in great demand by millers and malsters for drying corn. Over the years 1843-53 the Mining Company of Ireland produced nearly 52 thousand tonnes of good coal, and over five times the amount of culm and duff, ashy or sub-grade coal – and this was must less valuable and was used chiefly in kilns for burning lime.

As a result of this disadvantageous proportion of culm, the Mining Company of Ireland – monopoly producer in the Coalfield by this time – had great trouble in the 1840’s, and especially in the years of The Great Famine when economic activity stalled, in disposing of its stocks. According to its half-yearly reports, 50,000 tons of unsold culm lay in stock in 1847. This represented an unrealised income for them of £14,600 at the time.

Miners from the Commons and Ballingarry joined the Young Irelanders Rebellion of 1848. Killenaule village was an important organisational centre for the rebellion and; speeches were made by William Smith O’Brien from the first floor windows of the Ardagh House Hotel, which is still standing today.

The Mining Company of Ireland, as part of the established order, responded to the situation by firing a quarter of their workforce, and putting the rest on half-time. With the amount of coal and culm on the surface this was probably also a clever calculated economic decision.

In 1854 the Mining Company of Ireland contracted the Scottish mining engineer, David Landale to calculate how to get permanent drainage. He recommended that the steam and adit drainage was used together, and that they urgently kept excavating the drainage levels night and day.

By the 1860’s the adit had reached southwards to the Ballynonty exit. There was so much water coming out it was used to run the waterwheel at Ballynonty Mill.

The northward extension eventually reached Foilacamin 7.5 Kms away as the crow flies and that excavation may have continued up until the late 1880’s.

Making the level was clever thinking. The advantage of an adit is there is little cost during strikes or interruptions while the cost of pumping water is consistent regardless of what was happening in the mine.

The Mning Company of Ireland’s monopoly of production and sale was threatened in the years 1858-59, by some smaller concerns in the Ballingarry area. The effect was beneficial in that coal and culm prices came down somewhat.

In 1863 Copper Steeple the tallest ventilation shaft in the Slieveardagh Coalfield was built, it was to have been connected to the mines below but was never connected.

Slieveardagh Coalfield is hilly and has two very narrow seams of coal, not much more than 18” deep so any workings have always been troubled by water. In the years 1870-85 much expense went into upkeep and maintenance of drainage levels.

In the last decade of its involvement in the coalfield, the company was encountering difficulties: in and around 1882 during the time of the Land League Movement the countryside became politically unstable and production was affected. And by 1887 the half-yearly records indicate that a serious commercial rival had arisen, private lease holders and unlicensed owners and were also mining the coalfield.

1889/2 is the mining Company of Ireland’s last half-yearly report in the coalfield. They were realising stocks of coal and culm, but nothing more is mentioned.

The Mining Company of Ireland left behind a community of capable miners, underground maps of the worked areas and mine buildings some of which are still standing. It’s legacy was to work the coalfield as one entity and excavate the extensive underground drainage levels.