100 years ago, Slieveardagh Miners in the Transport Union Newspaper 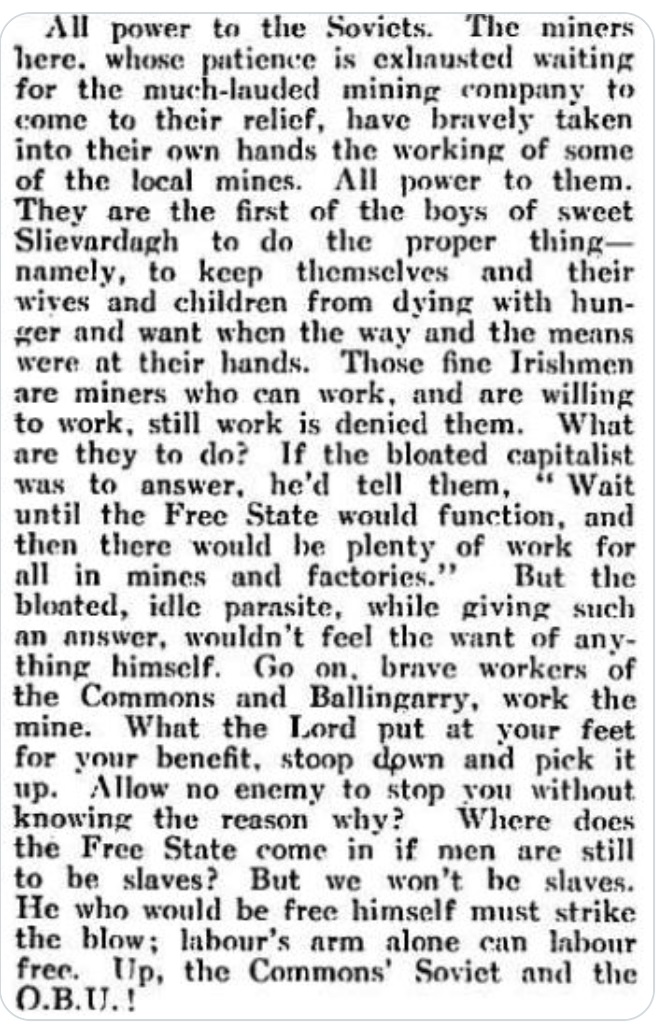 Thank you to Terry Dunne of Peelers and Sheep who tweeted this article from 100 years ago.

All power to the Soviets. The miners here, whose patience is exhausted waiting for the much-lauded mining company to come to their relief, have bravely taken into their own hands the working of some of the mines. All power to them. They are the first of the boys of sweet Slieveardagh to do the proper thing- namely, to keep themselves and their wives and children from dying with hunger and want when the way and the means were at their hands. Those fine Irishmen are miners who can work, and are willing to work, still work is denied to them. What are they to do? If the bloated capitalist was to answer, he’d tell them “ Wait until the Free State would function, and then there would be plenty of work for all in mines and factories.” But the bloated, idle parasite, while giving such an answer wouldn’t feel the want of anything himself. Go on, brave workers of the Commons and Ballingarry, work the mine. What the Lord put at your feet for your benefit, stoop down and pick it up. Allow no enemy to stop you without knowing the reason why? Where does the Free State come in if men are still to be slaves? But we won’t be slaves. He who would be free himself must strike the blow: labour’s arm alone can labour free. Up, the Commons’ Soviet and the O.B.U.!

The O.B.U (One Big Union) was a radical labour union formed in Western Canada in 1919 and dissolved in 1956.

As was the way, the arrival of the new Free State did not improve the life of the miners, post first World War it was recorded that there was no dynamite and commercial mining had stopped. During the 1920's the small basset mines became the dominate way of reaching coal in the Slieveardagh hills for the next twenty years until the arrival of the State mining Company Mianrai Teoranta. See the Mines Sites / Virtual Tour page Mianrai Teoranta 1941- 1952.

Another record of the Commons and Ballingarry miners being in difficulty was in 1848. This piece is from the Mines Sites / Virtual Tour page The Commons Colliery 19th Century.

During the Young Irelanders' Rebellion of 1848, colliers from the Commons and Ballingarry joined the insurgency. In response to the situation the Mining Company of Ireland, fired a quarter of the workforce, and put the rest on half-time.

The company's half yearly reports from 1842 on recorded that there was too great a quantity of unsold coal, more culm than coal was being purchased by farmers for lime kilns. In 1844 the miners were on a four day week with full pay but from 1846 to 1852 (during the great famine) there was very little demand for coal. The miners involvement in the Young Irelanders' Rebellion gave the Mining Company of Ireland an excuse to fire a quarter of the workforce and reduce the remaining workers hours. It seems that they did not need the miners to work as they had more product than they were able to sell. In 1853 Guinness's bought coal from the Mining Company of Ireland and the Colliery and miners did work on, with the Commons Colliery abandonment plan dated 1887.

Does anyone have any information about a miners strike at Copper Colliery in the late 1950's probably 1957?

The strike was broken on the eve of a settlement that would have provided for safety measures including masks and wet boring. The two Union leaders (brothers from The Commons) elected to represent the striking miners were blacklisted and no longer had jobs in the reopened mines. They and their families emigrated in the early 1960's. Sadly both men died young from 'Coal Mine Dust Lung Disease'.

Does anyone have any recollections of this strike or any records, reports or newspaper articles from the time, any information will be added to the website.

Look in the Related Projects page to find out about a project from 2017 The Commons Ghost Village all about the Commons Village in the 1960’s.

No items found.
Please allow a few minutes and refresh the page to see your comment.
Oops! Something went wrong while adding your comment. Please try again later.
61f6c862491e8b63f6a0f927